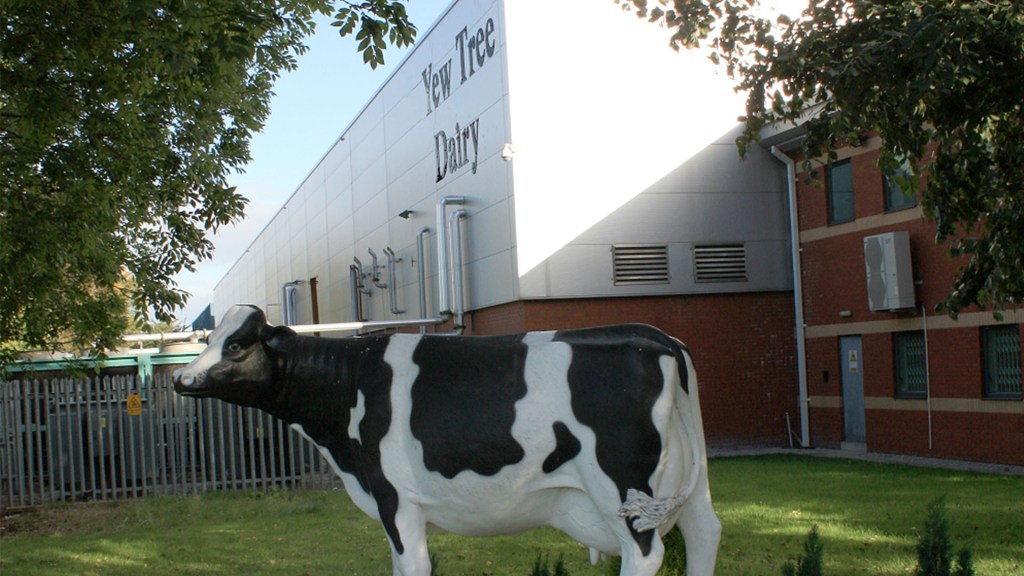 Yew Tree Dairy is one of the largest family businesses specializing in the milk industry, with one of the biggest milk processing plant in Great Britain. Founded in 1904, it has grown nationally and internationally thanks to the excellent reputation of its dairy products.

The new Yew Tree Dairy processing facility, opened in 2010, uses state-of-the-art technology which can process large volumes of milk every day, producing different types of milk and cream for the UK market and a wide range of powdered milk for national and international markets.

To understand the extraordinary evolution of Yew Tree Dairy you need to know its history: it all began in the early 1900s with the purchase of a farm.

Initially, the company consisted of a group of producers who began to sell fresh milk in cans directly to households. For many years this was how the Yew Tree Dairy operated.

In the 1970s and 1980s, the business of delivering milk to households grew and then it really took off in the 1990s when it started supplying a large number of local stores. This development led to an increase in production capacity: larger milk processing equipment was installed and the dairy began to produce milk in cartons and plastic bottles for sale to wholesalers.

Growth continued in the 2000s, until it became clear that the size of the factory was no longer sufficient to support the company’s development. In 2010, the site was opened in Skelmersdale (UK), and in 2012 the number of filling lines increased from 4 to 7: Yew Tree Dairy was ready to move up to the next level.

In 2012, however, the British Government abolished milk quotas, thereby allowing dairy companies to produce as much milk as they wanted. With the milk market shrinking, Yew Tree Dairy’s winning idea was to invest in milk processing equipment to exploit the expected surplus milk to produce powdered milk and semi-concentrated milk.

After few meetings, CFT Group came to be the ideal partner to deal with this particular requirement.

We studied the plan to extend the Yew Tree Dairy milk processing plant over three stages, to allow for a gradual and continuous development from the beginning of the process until the achievement of complete efficiency and flexibility: from traditional milk and milk products to a flexible facility for the production of powdered milk and semi-concentrated milk with CFT premium milk processing technologies.

First of all, we recommended that Yew Tree Dairy use one of our best-known machines, one that has been installed by food and liquid food processors all over the world. The Apollo falling film evaporator is renowned for its excellent reliability and sensitivity in the treatment of products and is one of the best solutions in CFT Group’s Food & Liquid Food Processing range. Its extraordinary level of energy saving has never been achieved by other applications: Mechanical Vapour Recompression (MVR) technology uses a centrifugal fan driven by an electric motor or steam turbine to compress the vapour of the separation chamber, thereby increasing their enthalpy and allowing them to be used as a heating medium in the exchanger.

This means a significant reduction in management costs and a big improvement in quality.

Apollo is capable of concentrating up to 60 tons of milk per hour of infeed product from 9% to 50%, with evaporated water extraction ranging from 12 t/h to 50 t/h. The product obtained as such in the form of a concentrated liquid, or it can be transformed into a solid powder with the application of another technology. Thanks to the minimum holding time (only a few minutes) and reduced temperature difference (6°) between the steam exchanger and the product inside the tubes, the product is not damaged in any way. The quality of the output concentrate is very high and this is difficult to obtain using other concentration technologies.

The processing times of this technology are much more efficient than with any other machine with a similar function (20-24 hours without washing, compared to 14-16 hours of other technologies on the market).

For these particular reasons, Apollo is the most suitable solution for the development of a first-order concentration of both fibrous (tomato or citrus fruit concentrates) and clear thermo-sensitive products, such as fruit juices, milk and other dairy products.

Yew Tree Dairy were convinced by this data and decided to add an Apollo in their milk processing plant: it was only the beginning of a project that would lead to a turning point in the company’s development.

Immediately after the British Government abolished milk quotas in 2012, the Yew Tree Dairy management realized that within a few years there would be a surplus of milk production: hence the need to differentiate the business and find the ideal partner to install a powdered milk factory. Once again, CFT Group was the perfect partner for the project, providing integrated solutions for evaporation and drying through a partnership with Dutch Drying Systems, a Dutch company which specialises in the design and production of first-class spray dryers.

The Spray Dryer is the perfect example of this type of technology and was installed by the Yew Tree Dairy factory to supplement Apollo.

The milk coming out of the evaporator has a concentration of 60% and is introduced in the primary cylinder of the Spray Dryer by piston pumps, at a pressure of up to 250 bar. When the liquid reaches the top of the cylinder, it is vaporized by a turbine or nozzle depending on the type of machine. The microscopic drops fall vertically along the entire length of the chamber of the Spray Dryer, coming into contact with a 180° hot air jet that virtually eliminates any liquid present. The powder thus obtained is treated on a fluid-bed cooler and then amalgamated on a vibrating bed.

Yew Tree dairy’s powdered milk is now being completely produced in the processing facility using a single system. At this point, there was only one last piece missing, which was to enable the milk processing plant to meet all types of requirements in order to produce fresh, condensed or powdered milk.

In 2017, CFT Group installed a second Apollo at Yew Tree Dairy, thus making the system complete and easy to adapt to the needs of the market.
There are mainly three advantages of this complete solution:

2) The production volume can be adjusted according to the amount of raw material available, using only one or both Apollo machines

3) The entire concentration range from 9 to 50% is managed in a single MVR type plant without the need for a TVR (Thermal Vapor Recompression) finisher. This generates an important reduction in energy consumption.

The professionalism of the installation and CFT Group’s customer service were the icing on the cake for this turnkey project, which enabled Yew Tree Dairy to adapt to the changes in the milk processing market using the best technology available by modifying its business without compromising on its identity.

The most important market is China, which accounts for about 26% of the global market for powdered milk.

The reasons for this expected growth lie in the way that society is evolving: with less time available and increasingly fragmented days, consumers tend to prefer fast, long-life food which is easy to prepare, which is also a characteristic of powdered milk. The market for flavoured powdered milk and vegetable drinks will also grow exponentially in the coming years.

In view of this, the strategy followed by Yew Tree Dairy is one that should also be applied in the future: CFT Group has the right know-how and technologies to transform the capacity and production quality of any company, ensuring its business grows along with its ability to adapt to different market situations.